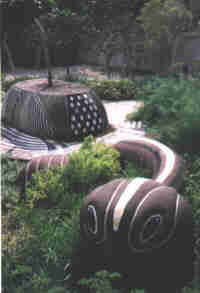 The turtle has his nose happily buried in rose-scented geraniums. His "back" is a storage area, and can easily seat many adults or kids. The "sundial" on his back is based on an Aboriginal totem, aka a "toa".

The following article was written about a herb garden/art garden I designed in Miami.
Published: Sunday, May 14, 1995 Miami Herald Home Section

HERB GARDEN HAS A TOUCH OF OUTBACK

A garden is a reflection of your interests, your taste, your particular and perhaps
idiomatic sense of the universe wrought small enough to comprehend.

Herb gardens, on the other hand, have a long tradition of being formal, geometric,
regular, symmetrical.

Can you take well-traveled, free-wheeling gardeners and design a formal herb garden
with enough flare to suit their personalities?

You can if you mix an aboriginal, long-necked Australian turtle as a central figure and
plot the herb beds around it, add a trellised seating area and aboriginal bark painting
and a few ancestral totems called toas for flair.

Rick and Rowena Wallach are the gardeners; Anya McCoy is the garden designer.

Rick Wallach is originally from Long Island. His family has had a winter home on
Miami Beach since the 1960s and Wallach graduated from Miami Beach High in 1968.
Rowena Wallach is from London. Some of her family lives in Melbourne, Australia.

Semi-retired from his family-owned insurance business, Rick Wallach is working on a
doctorate in English literature at the University of Miami. He, Rowena and daughter
Chelsea have made a couple of trips to Australia and became enchanted with
Aboriginal art. Hence, the long-necked turtle -- and other art that adorns their South
Dade home. (Son Ian was born nine months after Rowena accidentally put her hands
on aboriginal fertility symbols in a reserve north of Darwin, but that's another story.)

The herb garden is an outdoor adventure for Wallach, who used to grow herbs
indoors in a New York greenhouse. He says he and Rowena use herbs every day, in
teas, cooking, marinating, making ice cubes.

Anya McCoy earned her master's degree in a landscape architecture program of the
State University of New York and Syracuse University. She specializes in herb and
edible gardens in South Florida. A friend left one of McCoy's business cards at a
bookstore where Rick found it.

"He called me and we talked for an hour. We just hit it off," McCoy said.

The herb garden is part of a larger garden and landscape McCoy is designing for the
family. The larger scheme includes a pond, fruit grove and arid garden that will house
live reptiles.

"But I said if you want herbs and vegetables, you have to plant, harvest and replace,"
McCoy said. And as a reminder of the seasonal harvesting cycle and the movement of
time -- and to pick up on the family's love of reptiles -- McCoy designed the turtle for
the center of the garden and made the path like a snake slithering beneath it. The
turtle is big enought to sit on, made of precast concrete and acrylic by Iconocrete
Designs of Palm Bay.

Wallach adapted a decorative aboriginal design for the turtle's back.

The herbs have been placed in the garden according to drainage conditions. The
south side does not drain well, so mints, parsley, cilantro, peppers, Japanese eggplant
and squash went there.

On the drier side are the lavenders, thyme, sage, oregano, basil and scented
geraniums, among others. Scented geraniums, without irrigation through the summer,
can make it, if you keep a baking-soda spray at hand to control fungus, says McCoy.
(Mix 1 tablespoon of baking soda in a gallon of water with a few drops of liquid
detergent; use the spray every few days to keep ahead of summertime fungus.)

This summer, the south side will be deconstructed to a container garden, since
drainage problems haven't been overcome.

"We're going to put in large pots to germinate such things as vegetables, and have
slightly better control" over soil moisture, said Wallach.

In a bed or pot, mix peat, perlite and sand for a growing medium that will hold moisture
but also drain. Fertilize every couple of months, using fish emulsion or 20-20-20 water
soluble fertilizer, or use a slow-release fertilizer. Shade in the summer will help pull the
plants through the heat.

Mints; tricolor sage; lemongrass for everything from tea to chicken soup; garlic
chives ("These can do the design duties of liriope," McCoy said); Cuban oregano;
curry leaf; rosemary; sage.

In the Wallach garden, McCoy used lemongrass, tarragon and peppers by the
walkways because they look good year round.

Anya turned Rich and Rowena on to ways to incorporate herbs into their menus.

"Make a fruit salad, and take half a leaf of rose- scented geranium, dice it, and mix it
into the salad," says Wallach, by way of explaining how he uses the scented plant.
"Let the mixture set overnight in the refrigerator, and you'll get a wonderfully
rose-scented salad the next day. Lemon or orange-scented geraniums work, too, but I
prefer the rose- scented."